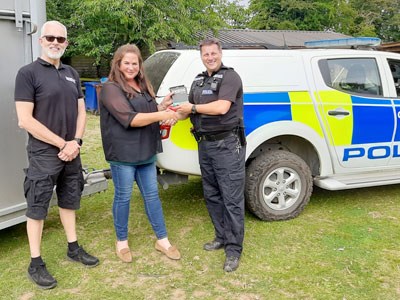 Thames Valley Police’s Rural Crime Taskforce have successfully reunited a resident with their stolen horse trailer, as the taskforce announces a partnership with DataTag to support communities to tackle rural crime.

On Tuesday (12/7), the Thames Valley Police Rural Crime Taskforce reunited a resident with her previously stolen horse trailer. Ellie, from Northall, Buckinghamshire, had the trailer stolen from her property and contacted the police to report the issue. On Friday (8/7), the Rural Crime Taskforce spotted the trailer in Banbury and checked the details to verify it was the stolen vehicle. Once confirmed, the vehicle was seized and contact was made with Ellie to return the trailer to her.

“I always thought it would never happen to me. I am thankful to Thames Valley Police for their support in returning the trailer. My advice for rural communities is to remember what your vehicle identification number (VIN) is and any distinctive features it may have to make it easier for officers to identify potential stolen vehicles.” 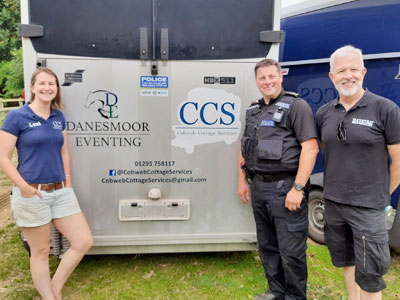 On the same day, the Taskforce were joined by Datatag to officially launch the partnership with a new sticker for rural vehicles, which signal to police to stop the vehicle if it is spotted out after 10pm.

The stickers will form part of a security system which the Rural Crime Taskforce can install to vehicles and machines of victims of rural crime across the Thames Valley. These measures help officers identify stolen plant and machinery and make it easier to return stolen property to their rightful owner.

“It was a privilege to reunite Ellie with her stolen horse trailer. The timely reporting of the incident allowed officers to be on the lookout for the trailer while on duty and serves as a reminder that the taskforce aims to make the Thames Valley a hostile place for those who commit rural crimes.”

“Our partnership with Datatag will bolster this by making plant, machinery and vehicles less desirable to theft with a number of security measures now available for officers to install.”

“Communities can also support us with this, by making sure they know their property, noting makes, models, colours and distinctive features; reviewing their security; and continuing to report rural crime to the police via 101 or online.”

“Our ongoing partnership with Thames Valley Police is one of the longest serving with any force across the country. The proactive and focussed approach to rural crime from Thames Valley Police fits perfectly with the aims of Datatag Security. This enables us to support the force with the official CESAR Scheme to help residents in the Thames Valley, which we are proud to be able to do.”

Further information on rural crime and prevention advice can be found on the TVP website.