Identification of stolen agricultural plant has now been made easier with CESAR.

CESAR marking of agricultural machinery has contributed to a 60% decline in thefts since the scheme was launched in 2007. That’s 60% fewer farmers put to the inconvenience of coping without the equipment they need, often at busy times of year, never mind the cost and time of replacing the lost machine.

CESAR is the official construction and agricultural equipment security and registration scheme. Established in 2008, it is the only scheme of its kind which incorporates a database of ownership, allowing stolen machinery to be identified and returned to its rightful owner. CESAR has the support of the Police, Home Office, major insurers, equipment manufacturers and their trade association, the Agricultural Engineers Association (AEA).

The triangular CESAR registration plate has become the industry standard identification mark and acts as a significant deterrent against theft. Its almost unbeatable layers of security marking technologies also make CESAR an invaluable aid to recovery; CESAR marked machines are more than twice as likely to be recovered as unmarked equipment. That’s why all major insurance companies offer discounts of up to 20% on premiums and reduced excesses for cover on CESAR-marked machines.

CESAR uses State of the Art Datatag ID technology, with both visible and covert markings, making it a real deterrent. There is a secure and dedicated 24/7 UK secure Contact Centre and strong links with the Police, ensuring that details of stolen machinery can be circulated quickly, improving the chances of recovery.

There are no annual fees for CESAR, just a one-off investment in marking and registering your equipment for life.

What Is CESAR Video 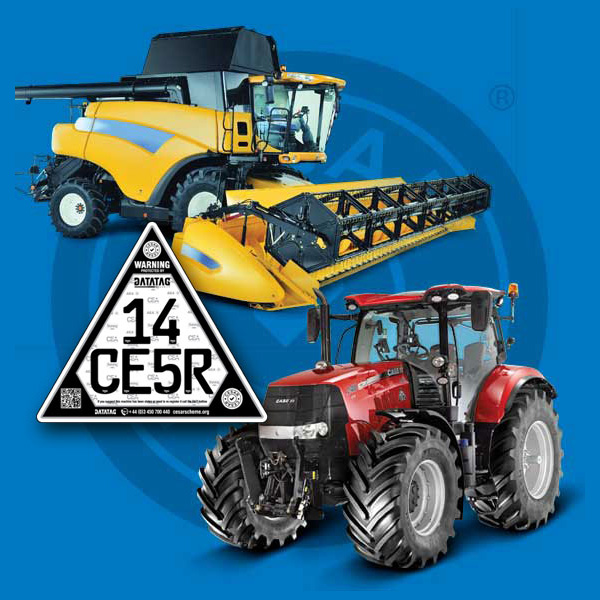 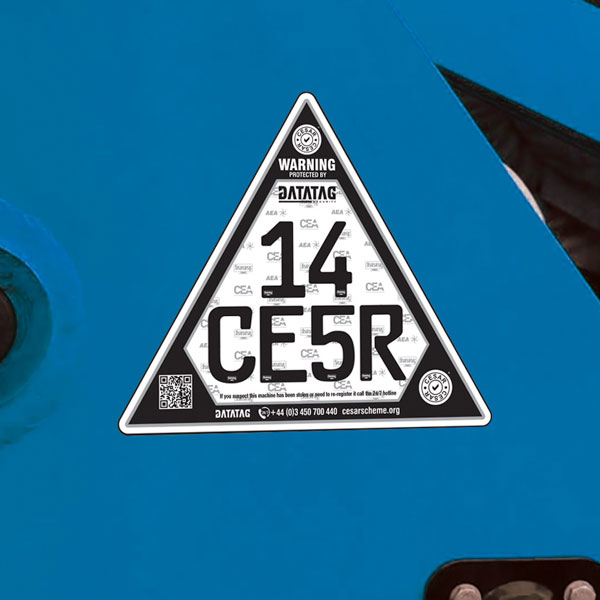 These tamper-proof plates carry a unique plant identification number ensuring that your property can be tracked and returned in the event of theft. 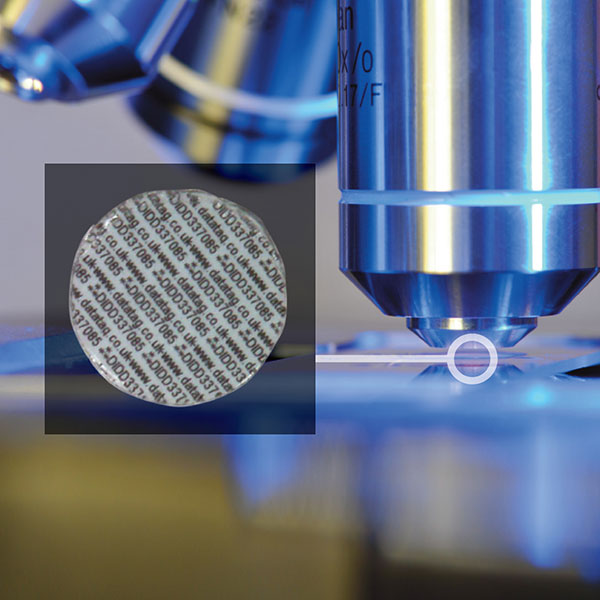 A superior microdot identification system developed for ease of use. The Datadots can be applied to any surface, thus making it virtually impossible for the criminals to locate and remove them all. 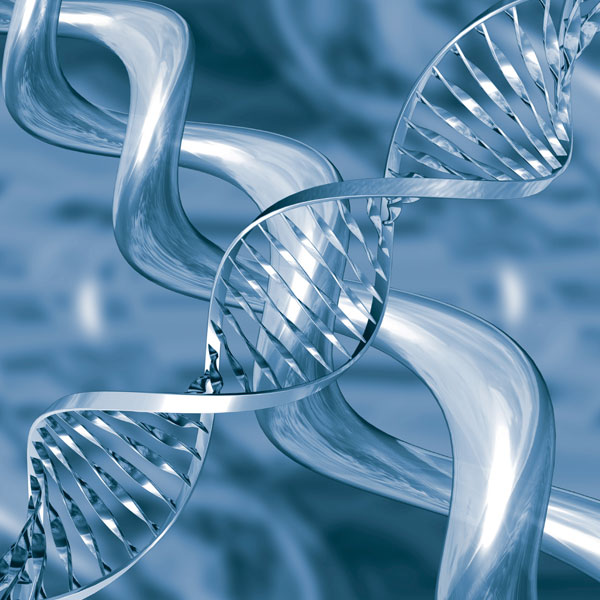 A unique chemical DNA solution. Each piece of equipment is be protected with an invisible and unique DNA code. Criminals will have to be confident they have removed every molecule of Datatag DNA. 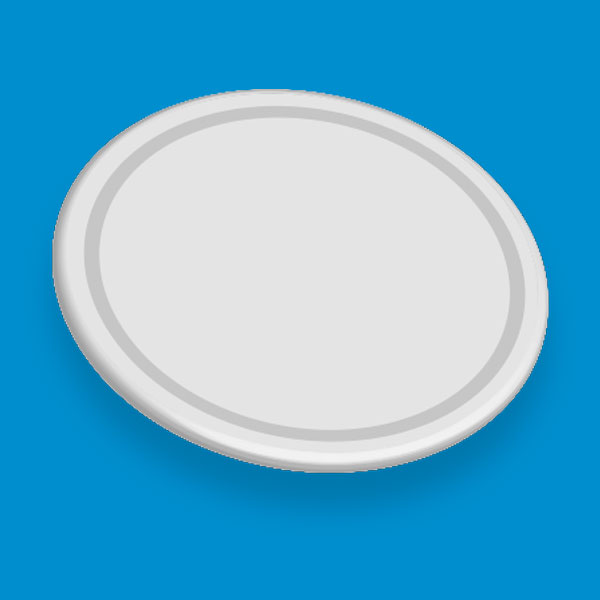 This flexible transponder contains a unique code, permanently programmed into its' integrated circuit, which cannot be altered or deleted and is impervious to either electronic or magnetic attack. 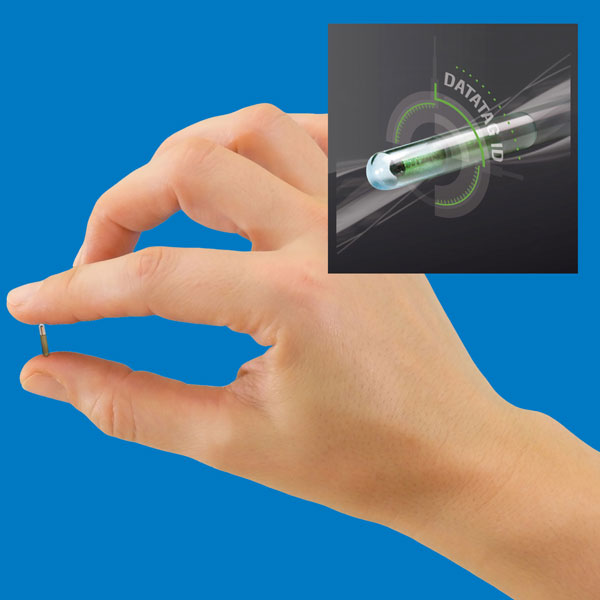 This transponder is roughly the size of a grain of rice and can be easily installed. It contains a unique code number which is permanently programmed into its integrated circuit. The number cannot be altered or deleted.

How is CESAR a theft deterrent?

CESAR is made up of state of the art Datatag technologies including the now iconic triangular tamper evident ID plates, Datatadots®, RFID Transponders and forensic Datatag DNA with UV trace. Once a machine is fitted with CESAR it is practically impossible to hide its true identity and in the unlikely event of a theft the police have 24/7 access to the database through the secure contact centre which enables them to positively identify the stolen machine and recover it back to its rightful owner.

What is the CESAR Triangle

This uniquely numbered triangular tamper evident ID plate gives each piece of equipment it's own unique identity. Datatag will take legal action against any copying or unauthorised production of these unique ID plates that contain Datatag's world wide registered trademark.

Datadots are transparent microscopic plastic discs (less than 1mm in diameter) printed with a unique alpha numeric code and listing Datatag's telephone number. There are hundreds within the system and they are applied in hidden places all over the vehicle. Only one is required to prove ownership therefore a thief would have to be 100% confident that they had found and removed every single one to avoid detection and prosecution.

Do the electronic Datatag transponders ever wear out or need servicing?

No, these unique electronic transponders contain no 'working' parts and therefore neither wear out or need servicing. They are powered by, or "wake up", only when interrogated by the special Datatag scanners provided to the Police.

Where are the Datatag scanners and who has them?

Since 1992, Datatag has distributed thousands of their scanners free of charge to all UK Police Forces including some in Europe to help combat crime and identify stolen property.

Is my personal and vehicle or property information safe?

Yes, Datatag are accredited to the strictest database standards including ISO:9001 and LPS 1224 (The recognised standard for database security) and are a "Police Preferred Specification - Secured by Design" company accredited and supported by NPCC (National Police Chiefs Council) and the Home Office. Datatag do not share confidential data with anyone unless for security reasons - we may occasionally communicate with customers to keep information up to date, something which is critical in the fight against crime.

What happens if I sell my property?

The Datatag membership is transferable, and for a small re-registration fee, the new keeper can have their name and address added to the secure Datatag database.

What happens if my property is stolen?

Please advise the Police immediately, then contact Datatag quoting your membership number and the crime report number the Police have given you, and we will flag a warning against your vehicle on our database.