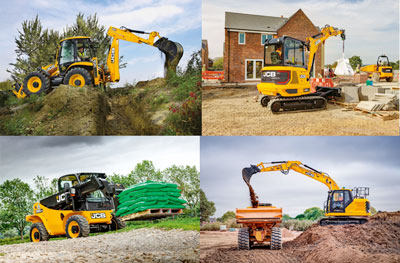 The common theme in all of the new product announcements is the adoption of EU Stage V emissions-compliant diesel engines across the board, from a new 40kVA diesel generator to brand new compact excavators in the 3.5/3.6-tonne bracket.

The two-wheel steer 3CX PRO, the four-wheel steer 4CX PRO and its heavy-duty stablemate the 5CX PRO all feature a new CommandPlus operator’s cab and JCB Automate features to make the machines easier to use and boost productivity.

Back in January 2020, JCB announced CESAR Emissions Compliance Verification (ECV) will be standard on every JCB EU Stage V and electric machine for the UK market from March 1, 2020. A second label, which can easily be scanned to verify the machine’s emissions compliance, will be positioned alongside the existing CESAR triangle. UK projects already trialling the scheme, have found that less time is being lost on delivery to site and there are fewer air quality inspections required for equipment in operation.

The 68kW (91hp) engine used by their predecessors has been replaced with a new 81kW (109hp) Stage V powerplant operating through a new six-speed EcoRoad transmission with new gear ratios to reduce fuel and save time, says JCB.

The company’s Loadall range of telehandlers have also all be upgraded with the addition of Stage V engines. All models, from the 531-70 through to the 540-200 are now powered by the 448 DieselMax engine.

Two new 3.5-tonne Loadall models – a zero-tailswing model and a conventional machine – have been added to the company’s compact excavator range.

The 35Z-1 replaces JCB’s previous-generation 8035ZTS zero-tailswing model; but the conventional rear-end 36C-1 is a new addition to the range. This machine doesn’t have the 35Z-1’s compact dimensions but it compensates for this with increased productivity resulting from greater reach and better stability and lifting performance.

Both of these models are powered by a Stage V/T4 Final Perkins diesel engine delivering 18.4kW (24.6hp) of power. The engine uses mechanical fuel injection and has no requirement for a diesel particulate filter (DPF) or any form of exhaust after-treatment.

The existing T4F models will continue to be offered in non-Stage V territories, says JCB.