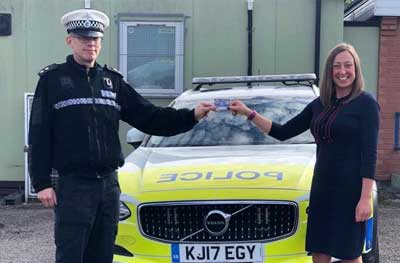 The second CEA CESAR Champion Award for 2020 has been awarded to Marie Biddulph from Highways England.

Earlier this year the Construction Equipment Association (CEA) launched its CESAR Champion initiative to recognise the efforts of officials who uses the CESAR technology to identify a stolen piece of machinery. In an effort to encourage more engagement with the CESAR Security Scheme, the award is now being given to any officer who completes 10 checks on agricultural or construction machines or ATVs protected with the security system.

Following on from the announcement of the first winner, Detective Constable Chris Piggott from the National Vehicle Crime Intelligence Service, the CEA are delighted to announce its second winner is Marie Biddulph.

Marie works as a Road Safety Coordinator for Highways England in the Midlands.  Marie coordinates multi-agency road safety checks in partnership with the Roads Policing Units of all of the Midlands Police forces, focussing on road safety priorities like Safer Loads, Driver behaviour and stolen/illegal plant and machinery. These events are supported by agencies such as DVSA, HMRC and Datatag.

Marie regularly supports both the Police and Datatag by conducting checks via the CESAR Secure call centre on plant and agricultural machinery brought into check sites where they are displaying a CESAR plate. This assists the police in identifying stolen assets as part of their work to make the roads a 'no-go' area for criminals.  Marie has conducted over 30 checks so far this year.

“Highways England are proud to support the Cesar Scheme. This initiative enables us to help protect industry against theft of valuable assets.   Working alongside the Police and other partners, we aim to prevent stolen plant and machinery being transported on the strategic road network.  This award recognises the positive results that can be achieved by collaborative, partnership working.”

Inspector Sion Hathaway presented Marie with her award and said,

“I’m really pleased that Marie’s hard work has been recognised.  At CMPG we’ve been working alongside her for several years and her enthusiasm and commitment to making our roads safer are second to none.  Marie’s support for the Cesar Scheme is typical of the way she throws herself into everything she takes on and the results speak for themselves.  We look forward to continuing to work alongside Marie and our other partners in order to continue to make our roads a safer, crime-free environment.”

The CESAR Scheme, which is powered by Datatag technology, is a multi-layered system that includes tamper-evident warning and registration plates, RFID transponders, a microdot identification system comprising between 500 and 1,000 microdots which are scattered around the machine, and forensic DNA. Once fitted, these technologies are almost impossible to remove, and when the machine is registered on Datatag’s secure database, these unique details are accessible to the police 24/7, enabling them to identify any machine at the roadside. The CESAR website also has a ‘hot button’ to instantly report stolen machinery.