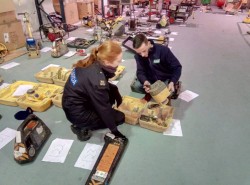 At a recent event hosted by the Gardai, Sergeant Peter Mc Connon, Crime Prevention Officer for County Carlow, had on display over 200 items of stolen and recovered power tools.

The haul was the result of a successful police operation in the area and the 'identification parade' of tools was put on in the hope that members of the public could identify them. However it was quickly apparent that identifying the individual items was not straight forward and many remained unclaimed.

Anticipating the problem of identifying identical powertools would not be straight forward, the Gardai invited Datatag distributor Ger O'Sullivan to assist with the job. Ger was able to demonstrate how quick and simple Datatag technologies are to use, and how they can help Officers identify recovered items and reunite them with their owners.

Feedback from the demonstrations was extremely positive with Ger saying:

"It was a shame none of the recovered items had been fitted with Datatag as this would have made reuniting them with owners a simple job. However being able to demonstrate the ease with which Datatag works was a great benefit and I hope to be able to work with the Gardai to raise awareness of theft and what owners of vulnerable equipment can do to protect themselves..."

"The fact is, if owners protected their tools with Datatag, days like this would be a thing of the past!" continued Ger.

Datatag have been the power behind the Official Industry CESAR Scheme which protects larger items of plant and machinery and which has been responsible for a decline in thefts since launched in 2007. More recently Datatag launched MicroCESAR, an extension to the CESAR Scheme designed to protect smaller hand help power tools.