RURAL CRIME IS ON THE RISE 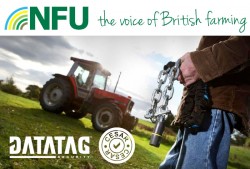 Every year rural crime costs millions of pounds and causes untold anxiety across the UK, which is why NFU Mutual analyses its claims data annually to assess the state of crime in the countryside.

In summary the NFU report stats are:

In geographic terms the following counties are the most affected by rural crime:

NFU Mutual has invested heavily to combat rural crime. Rural crime causes deep anxiety and extra work for farmers, and it damages the trust of those who live and work in the countryside. For this reason, NFU Mutual supports a number of initiatives that bring together the police, farmers and rural organizations to combat the problem.

In 2010 NFU Mutual joined forces with the National Vehicle Crime Intelligence Service (NAVCIS) in an effort to reduce the levels of tractor theft. NFU Mutual also works with the Plant and Agricultural National Intelligence Unit (PANIU). These partners share information and engage with police forces throughout the UK and the across the globe. Farm machinery and vehicle theft cost £5.4m in 2016.

NFU Mutual are also long term supporters of The Official CESAR Scheme, the number one anti-theft and security registration scheme for agricultural and construction equipment. CESAR is owned by the Construction Equipment Association (CEA) and the Agricultural Engineers Association (AEA) and is powered by Datatag ID.

CESAR is made up of state of the art Datatag technology including tamper evident ID plates, Datatadots®, Transponders and Datatag DNA with UV trace. Once a machine is fitted with CESAR the details are recorded on Datatag's secure database. In the unlikely event of a theft the police have 24/7 access to the database which then enables them to identify the stolen machine and recover it back to its rightful owner.

The scheme which now protects over 250,000 items of machinery and was first launched back in 2007This year CESAR celebrated its tenth anniversary. Due to the proven success of CESAR, NFU Mutual are amongst the leading insurance companies who provide premium discounts for owners and contractors of up to 20% for all CESAR registered equipment.

Datatag also provides a theft deterrent system for Land Rover and other 4x4's. The success of this product has shown great recoveries and was very well received at the Country File Live show earlier this month.