DOOSAN MACHINE IS MARKED WITH THE 250,000 CESAR PLATE 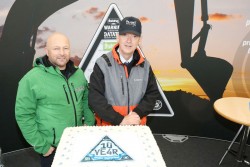 The 250,000 CESAR marked machine - a Doosan - was unveiled today at the Plantworx exhibition. The official CESAR Scheme, owned by the Construction Equipment Association (CEA), is the number one anti-theft and recovery system for plant and agricultural equipment and has proven itself to be invaluable in the fight against plant theft. Datatag ID, the technology provider to the scheme, are exhibiting as the CESAR Scheme at this the UKs biggest plant machinery show.

Doosan were first manufacturer to fit CESAR to their machinery and since then many leading manufacturers have followed suit by adopting the scheme. CESAR was launched back in 2007 to help combat the £1 million pound a week headache of construction and aricultural equipment theft. Made up of state of the art Datatag security marking technology which includes tamper evident warning labels, forensic DNA, Datadots and RFID tags, CESAR has contributed to a 70% reduction in thefts.

As well as celebrating the 250,000 marked machine CESAR was also celebrating reaching its tenth anniversary and a gathering took place on the exhibition stand to mark the event with a special birthday cake cut by the CEA's Chief Executive Rob Oliver and Datatag's CEO Kevin Howells.