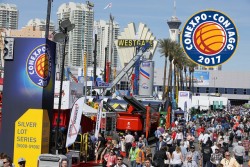 The official CESAR Scheme was highly visible at the Conexpo show in Las Vegas, last week. CESAR, the world's most successful security marking and registration scheme for construction and agricultural equipment, is owned by the Construction Equipment Association (CEA) and powered by Datatag technology.

Celebrating its tenth birthday this year, CESAR launched at JCB's Rocester headquarters in 2007, now protects over a quarter of a million pieces of equipment estimated to be worth more than £7 billion. CESAR made up of state of the art Datatag technologies is fitted on production lines on 3 continents by a veritable 'who's who' of leading manufacturers including John Deere, JCB, Gehl, Case IH and Doosan.

CESAR is a proven deterrent against theft and an invaluable aid in recovery. Over 22% of stolen CESAR marked equipment is recovered compared to 7% of equipment as a whole. Leading insurers support the scheme by offering insurance discounts. Notably NFU offer premium discounts of up to 25% on all CESAR protected machinery. The Home office and the plant and agricultural intelligence unit (PANIU) also support the scheme due to its outstanding contribution in deterring equipment theft and its invaluable aid in helping the police to recover and identify stolen items.

Datatag's MD Kevin Howells had this to say on his return from Conexpo, "I'm delighted that the CESAR scheme was invited to exhibit once again at Conexpo. It was great to see so many manufacturers displaying their CESAR marked machinery throughout such a huge show. We have come a long way since CESAR was launched ten years ago and Conexpo was a great way to see our achievements internationally."