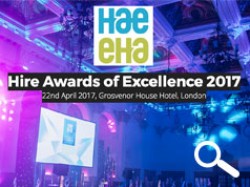 With the final awards announced at London's Grosvenor House Hotel on Saturday 22nd April 2017 the independently judged awards acknowledge the success of hirers and suppliers, along with the individuals who set the standard. Without doubt these awards are the most sought after accolade within the plant, tool, equipment and event hire industries and represent the best in class for companies and individuals working in the hire sector.

Included in the hire awards of excellence shortlist, in the Construction Industry Product of the Year category, is the recently launched MicroCESAR system powered by Datatag technology and owned by the Construction Equipment Association (CEA).

MicroCESAR, first announced at the Combined Industries Theft Solutions (CITS) conference, is designed to protect small power tools from theft in the same way as the CESAR System protects compact and large construction equipment. CESAR has proved to be a powerful theft deterrent and an invaluable aid in recovery and to date over 225,000 pieces of equipment are protected with CESAR.

MicroCESAR uses Datatag security marking technology to give each piece of equipment a unique and permanent 'fingerprint' that thieves cannot remove. Using a combination of a unique Datatag RFID transponder and a tamper proof warning/registration label with an integrated QR code MicroCESAR provides the police with quick and easy verification of ownership without the need for special equipment or lengthy laboratory testing.

As a bonus the Datatag technology used in the MicroCESAR system can also assist in stock management, helping companies track tools in and out of jobs and allowing users to easily access on-line health and safety advice and user manuals through the unique QR code and mobile enabled MicroCESAR website.

Major manufacturer STIHL announced their adoption of MicroCESAR at the Executive Hire Show in February and now fit MicroCESAR as standard to their TS range of cut-off saws including their best-selling TS 410 and the new Lithium-Ion powered TSA 230.

Other leading manufacturers are set to follow suit protecting a range of construction and landscaping equipment such as power tools, cut-off saws, hand-held hydraulic breakers and compaction plates.

Datatag's Managing Director, Kevin Howells, commented, "We're delighted to start 2017 with such positive news. Equally we're confident that MicroCESAR will mirror the success we have seen with the main CESAR Scheme. We've already received overwhelming industry support and STIHL's adoption will lead to other manufacturers following suit. We are honoured to be shortlisted for such a prestigious award and we're looking forward to the event."